On Wednesday, September 30, 2020, First Priority held a news conference with Internationally Renowned Artist Steve R. Skipper to announce their partnership and unveil Skipper’s newest painting entitled “Intercession in Washington.” Skipper and Anointed Homes Art have generously offered to support the children and youth of our state by donating a portion of the proceeds from each Fine Art Limited Edition Print and Giclee Canvas of the completed Original Oil Painting entitled “Intercession in Washington” to First Priority of Alabama.

“We are excited about being a benefactor of this particular work because of the bold, yet humble example that JK Scott and other National Champion Alabama football players gave all of us, particularly to our young people,” said First Priority of Alabama President Greg Davis. “In Steve’s painting we see the boldness exhibited by JK to ask the President of the United States if he and other players could pray for him, not as a president but as a person. We see the great humility in this painting as they all bow their heads before almighty God. I want to thank you in advance for your support of this project and First Priority ministries.” 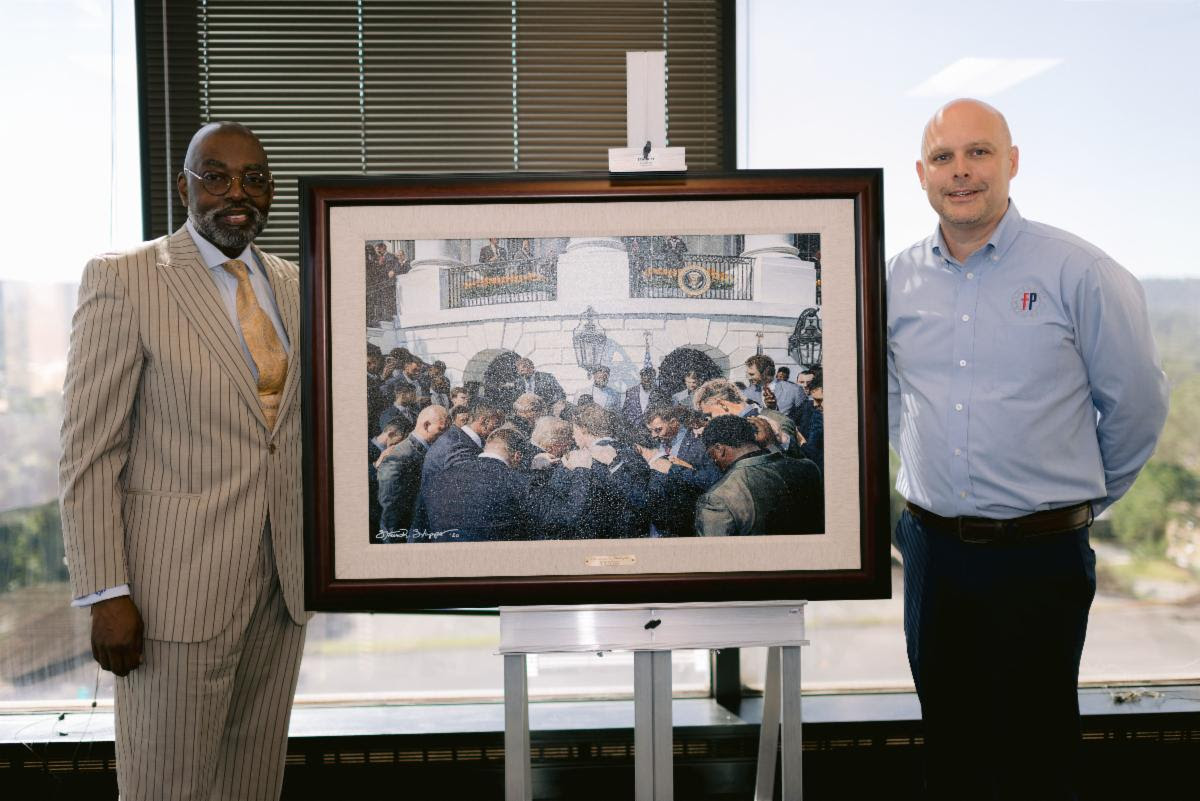 “I’m very very honored to be working with First Priority and Greg,” Steve said during the news conference. “One thing about the painting, JK Scott told the story about how God dealt with him to pray for the president. This wasn’t a political thing. It wasn’t a democratic or republican thing. It was a prayer that he wanted to pray personally for the president as a person, and I think that when the Alabama football team won the national championship and went to Washington to celebrate that, I think it took a tremendous amount of boldness considering the fact that an organized situation like that at the White House and a young man thinking about what God told him to do and he actually did exactly what God told him to do. It’s not a new thing for God to use young people to do something bold, to do something great like that to bring glory to Him. I think that this painting I wanted to do that, to preserve the story and preserve the message behind their boldness but at the same time for the painting to provide a source of inspiration to young people that God is using all over the country and I think that First Priority is a great organization that really really serves to be an inspirational tool that God is using for young people.”

We would like to thank Steve for his generosity and partnering with First Priority to help us reach students with the hope of Christ!

This painting would make an incredible Christmas present and you would be supporting First Priority at the same time! Get your painting today HERE. Be sure to check out the video above to watch the unveiling, the full video of the news conference below, and view pictures from the news conference HERE. You DO NOT want to miss the full video below; you will truly be blessed! You can also read a great article about the unveiling and other great articles in the Birmingham Christian Family Magazine online HERE.

If you weren't able to participate in See You at the Pole (SYATP) last month, we are recommending SYATP Part Two be… https://t.co/ikU7CAam5B
h J R